Miele claims it’s the biggest cooking innovation in decades and will change the way we cook at home. It uses electromagnetic waves, in combination with radiant heat and a convection fan, to cook each piece of food in the oven to perfection. Antennae measure the amount of energy each item has absorbed, and the oven then applies or removes heat as needed. Miele demonstrated its capabilities by sealing a piece of salmon within a block of ice and placing it in the Dialog oven for a little over 10 minutes. When they took it out, the ice was still frozen but the salmon inside was cooked through. ‘What’s the point of that?’, you may well ask. Well, there isn’t one, really. But it does demonstrate what the Dialog can achieve. In the same way that an induction hob heats the pan, rather than the hob surface, the Dialog heats the individual pieces of food rather than the oven. What this means is that if you put a chicken and a tray of roast potatoes in the oven at the same time, the oven will only heat the potatoes until they’re perfectly crispy before removing their heat. It will then continue to cook the chicken until it’s just right. This method of heating is far more efficient than a conventional oven, so Miele claims the Dialog is up to 70% faster than a conventional oven.

The Dialog oven opens up exciting possibilities in the realm of cooking. Its revolutionary technology enables the creation of completely new and innovative dishes. Cooking a fish in ice or veal tenderloin in beeswax without melting ice or wax, separating browning from baking, preparing different dishes and ingredients simultaneously, perfectly serving sophisticated dishes – always at the highest level.

The Dialog oven's revolutionary cooking method becomes obvious with a fish in a block of ice. The fish is cooked while the ice stays frozen.

The meat is cooked evenly throughout, not heated from the outside in. Thus, the wax coating remains miraculously unmelted – and the tenderloin comes out especially juicy and tende

With the new Dialog oven and M Chef technology it is possible to prepare Salmon fillet half cooked and half raw. Two completely different dishes in one.

The Dialog oven can separate browning from baking. You can decide, how much crust you want to have and make brightly coloured buns without browning the surface

True cooking enthusiasts demand the highest quality. The preparation of ingredients in a way that brings out their very best is what sets top chefs apart – and it's also what puts Miele's Dialog oven in a league of its own. While conventional heating works slowly from the outside in, the Dialog oven cooks dishes in their entirety. Meats end up succulent and uniformly cooked, the texture of seafood is rendered impeccable and bread gets the perfect crust

Conventional heating works slowly from the outside in. The Dialog oven, however, cooks dishes in their entirety. Meats end up moist and uniformly cooked.

The Dialog oven lets you consistently thaw meat, for example, quickly and perfectly – without unintentionally cooking it in places.

The Miele@mobile app’s recipe function includes many exclusive Dialog oven recipes. For the first time, it is now possible to send all recipe settings to the appliance directly from the app, with a single tap. 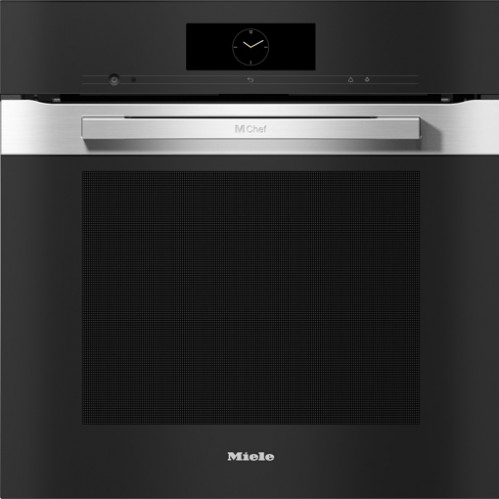